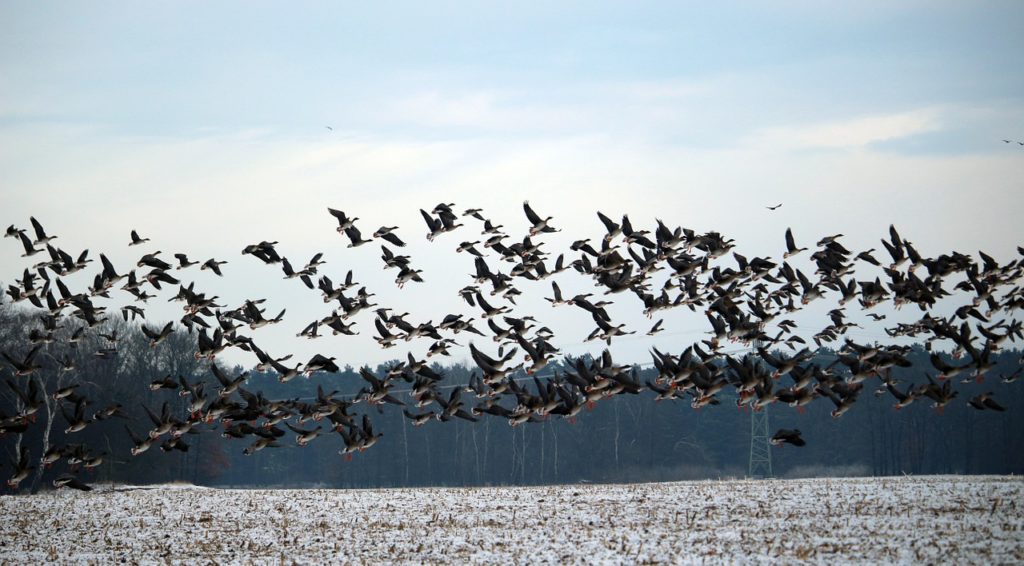 Why do Birds Migrate?

Why do Birds Migrate?

Although many people may associate the timing of bird migration with cold weather, it’s not exactly the cold that makes birds want to move to a different part of the world. Many theories are around trying to explain this phenomenon, from the shortening of the days to hormonal changes. Some scientists have found that changes in the length of daylight affects a gland in some birds’ bodies that produces a hormone that allows their bodies to start storing more fat under their skin, preparing for their long journeys. In the end, though, most birds migrate so that they’ll be able to find food. This is especially true for insectivores, whose food supply of insects either greatly diminishes or completely disappears in the winter. Whatever the reason, something in their bodies triggers the need to migrate, and they must then prepare for the long journey ahead.

Migration – Physical Changes in their bodies
The shape of birds’ bodies assists them in their migration treks across continents. With their streamlined body, hollow bones and well-developed pectoral muscles, not to mention their extremely efficient heart, most birds are literally built to fly long distances. As you can imagine, birds must consume A LOT of food before embarking on their twice a year journey. Small birds will actually double their body weight, while larger birds will increase their weight, but not as much. Building up these fat reserves in small birds allows them to travel for extremely long distances before needing to stop to ‘re-fuel’ – some birds may travel 90 hours before stopping even once! Other birds may migrate for one night, then rest for two or three in an area called a ‘stopover’. These birds may travel as far as 2,000 miles in one night, especially if they have a tail wind. Even tiny hummingbirds migrate. Ruby-throated hummingbirds travel across the ocean from Texas to the Yucatan peninsula, a trip of about 500 miles, without stopping for about 24 hours. Arctic terns fly 22,000 miles roundtrip from the arctic to the Antarctic and back every year!

To help reserve some of their energy, many birds will soar and glide, rather than constantly flapping their wings while migrating. This is especially true for larger birds who can’t store as much energy as the smaller birds. Examples of these birds include eagles, buzzards, and even storks. When hawks migrate together, they are called a ‘kettle’, and you may see them gliding on thermals of air. Thermals are updrafts of air caused by solar heating. One drawback to this method of gliding, however, is that the journey takes longer than if they flapped their wings the entire time.

How do they find their way?
Almost no migrating birds bring their young along to show them their migration route for their first time (although the sandhill crane is one exception). So, at least part of the reason birds migrate, and their knowledge of their migration routes, is instinctual. However, there are still many environmental cues that birds do use to find their way.

Birds often fly along migratory pathways called ‘flyways’. This isn’t necessarily because they like to hang out together, but because they’re all following the same basic clues to get them from point A to point B. The North American flyways include the Pacific, Central, Mississippi, and Atlantic. You can probably guess what they’re following – the Pacific and Atlantic coastlines, the Mississippi river, and the Rocky Mountains (Central flyway). Interestingly, some birds do not take the same route south as they take going north. One possible reason for this may be food availability, although it may also be due to winds at different times of the year.

Many smaller birds migrate at night rather than during the day. This may be because the air masses are more stable, there are fewer predators, and the air is cooler so they have less of a risk of dehydration and overheating. When they are traveling at night, it is speculated that birds may use the stars to navigate, as well as the setting sun. Experiments have been done to demonstrate that birds even use the earth’s magnetic field to set their internal compass and help them find their way north or south. This would be useful especially on overcast days or nights when visibility is low.

Migration Hazards
It has been estimated that half of all migrants that head south in the winter won’t return in the spring. Bird migration has even more challenges than just having enough energy and being able to find their way. They may encounter predation and bad weather along the way. Birds must also deal with the effects that humans have had on the environment. Sometimes the stopovers that birds have typically used may become strip malls, or their fall/winter grounds in the tropical rainforest may have been clear-cut. Many birds also fly into windows during their migration, especially windows on skyscrapers, killing or seriously injuring themselves. To help prevent this, we can break up the reflection of the sky in the windows with awnings or window screens, or by planting trees close to windows or putting bird feeders within a few feet of windows. Our natural areas and public lands, such as those in the San Juan National Forest, and the Tres Rios Resource Area (BLM), provide important habitat for many migratory species.

Fun Facts
•    At what heights do most birds migrate? Songbirds travel at less than 5,000 feet, and most of them even stay lower than 2,500 feet. Waterfowl and shorebirds, however, might fly as high as 10,000 to 20,000 feet!
•    Songbirds travel about 20 miles/hour, while waterfowl and shorebirds may travel 40 miles/hour or more.
•    Birds may migrate together in flocks of the same, or mixed, species, or they may go it alone. Loners might include herons, hummingbirds, kingfishers and woodpeckers, while “flockers” can include ducks, geese, cranes, gulls, doves, crows, jays and blackbirds.