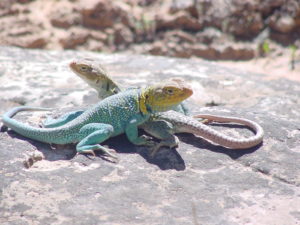 One of the neat things about living in Colorado is the ability to see all kinds of lizards in their natural habitat.  Lizards are a type of reptile – reptiles also include snakes, crocodiles and alligators, and turtles.  Lizards are classified in the phylum Chordata, subphylum Vertebrata, class Reptilia, order Squamata, suborder Sauria.  Lizards typically have dry, scaly skin, four feet, claws and a long tail.  They can be found in various habitats, including trees (arboreal), underground (fossorial), on the ground (terrestrial), and even sometimes in water (aquatic).  Most female lizards lay eggs, although some bear live young.  It used to be thought that there were only 2 venomous species of lizard – the Gila monster and the Mexican beaded lizard.  Both are found in the Sonoran desert.  However, not that long ago scientists discovered that monitor lizards (including Komodo dragons) and some in the Suborder iguania (including some iguanas) have mouth glands that secrete venom.

There are over 3,000 species of lizard in the world, and they are found everywhere except the arctic and Antarctic.  Lizards are often fast runners, and some can run up to 15 miles per hour!

Lizards use their tongue to find odors, as snakes do.  They are closely related to snakes, but lizards generally have legs, ear openings and eyelids.  Lizards have small teeth to bite their prey.  Most lizard bites in Colorado will feel like a pinch, although the bite of the Eastern collared lizard may cause some bleeding.  Lizard prey usually includes insects and spiders, and lizards can often help in controlling pest species.  They may also sometimes eat mice, and smaller lizards.

One interesting adaptation of lizards is that they will lose their tail when it is grabbed by a predator.  The predator is left with a squirming tail (the muscles in the tail continue to contract for a while), while the lizard runs and hides.  A new tail will grow back, but it may take several months, and a lot of the lizard’s energy.  For that reason, we should never try to make a lizard lose its tail on purpose!

Although lizards may all look the same to some people, they often have distinct features that help to identify them.  Lizards in Colorado range from the Eastern collared lizard to the diploid checkered whiptail, to the Roundtail horned lizard, to the Many-lined skink.  Skinks generally look like a ‘true’ lizard, but have almost no neck, and shortened limbs.  Horned lizards are often incorrectly called horned toads because of the shape of their short, squat bodies.  Their ‘horns’ are actually spines found on the back of the head.  Some whiptail species are one of the few species of animal that can reproduce asexually – females lay eggs that develop without fertilization.  Essentially, the whiptail lizard clones itself.  The checkered whiptail in Colorado can be either diploid (having two sets of chromosomes) or triploid (having 3 sets of chromosomes).

A couple of Colorado Lizards…

In our part of the state, the Eastern collared lizard is one of the most common, and easily identified lizards, especially during mating season.  During this time, males change to bright colors of yellow, blue and green.  They can also be brown, and have various patterns of spots and dark bands.  During mating season the males especially may be easy to spot, as they display themselves on top of a rock or log.  The collared lizard gets its name from the 2 black bands on its neck that are usually separated at the nape of the neck.  Collared lizards may eat anything from grasshoppers and spiders, to smaller lizards and snakes.  They are preyed upon by hawks and large snakes.  When trying to escape a predator, they have been seen to run away on only their hind feet! 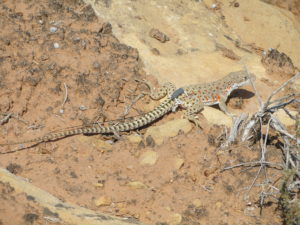 If you haven’t heard of the longnose leopard lizard before, you are probably not alone.  Although they can be very common in the Great Basin of Nevada and Utah, the longnose leopard lizard is only found in a few distinct places in western Colorado, one of which happens to be Canyons of the Ancients National Monument (CANM), west of Cortez.  In fact, this species is considered to be a sensitive species by the Bureau of Land Management (BLM), meaning that it is a species that could have some risk of becoming endangered.

Not much is known about the longnose leopard lizard in Colorado. Geoffrey Hammerson, author of Amphibians and Reptiles in Colorado, states in his book that longnose leopard lizards only appear above ground for a short period during the year – from late May to early August, and are most active from 2-6 hours after sunrise.  Otherwise they are either hibernating while it is cold, or aestivating, staying underground while it is extremely hot.  One thing getting them above ground is the opportunity to mate, and females will usually produce between 6-10 eggs every year.  Longnose leopard lizards probably used to be more widely distributed in Colorado, but with the expansion of development and agriculture, not to mention cheatgrass, their populations have declined.

MYTH: The tail of a skink is “poisonous” and can sting you.

No, their tail is not a stinger and is not venomous.

MYTH: If a lizard bites you, it will hold on until it thunders.

No, they have no reason to hold on that long.

In Egypt, they say that in spring lizards climb an east-facing wall and look to the east. When the Sun rises, the lizards sight have the ability to restore the sight of a blind person.

In Australia, the aborigines believe that the sky will fall if you kill a lizard.

In ancient Egypt and Greek symbolism the lizard represented divine wisdom and good fortune. In Roman mythology, lizards symbolize both death and resurrection because it was thought that they slept through the winter, and woke up at the end of it. Early Christianity associated the lizard with evil. On the Pacific islands of Polynesia and Maoris lizards are revered as a “heaven god.”

Dinosaurs weren’t lizards!  Current scientific theory is that dinosaurs were reptiles, but were not lizards.  The main difference is the way their legs attach to their bodies.  Dinosaurs’ legs go down, as our legs do.  Lizard legs go out in a squatting position.  It is also possible that dinosaurs were warm-blooded animals, unlike cold-blooded lizards.

(* denotes sensitive species as designated by the BLM)

Found a lizard in Colorado you can’t identify?  Colorado Parks and Wildlife has a handy Lizards of Colorado key found here:  http://cpw.state.co.us/documents/education/studentactivities/coherpquickkey.pdf

If you find a lizard in the wild, observe it from a distance so it doesn’t run away.  Do not try to capture it, as it may lose its tail, or become very stressed.  Lizards in Colorado are lucky to live here, so please leave them in the wild, where you found them!