What an amazing mid-winter thaw! All this warm weather makes it hard to remember the preceding cold and snowy months of January and December and even early February. The deep snow and bitter cold have made this winter extra tough and stressful for local wildlife. 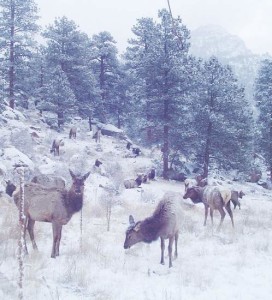 Elk winter in herds to discourage predators and sleep together for warmth.

While some animals are hibernating and others have migrated to warmer latitudes, those that have adapted to tolerate the winter have to work harder to stay alive.

Tolerating wildlife have a variety of techniques for surviving the winter. One technique is to yard up. Deer often do this in the deep snow. They create a small network of trails and sleeping areas. They do not stray out of this area into the deep snow, even if they see other food nearby. To do this would risk too much energy. In a particularly harsh winter, animals may run out of food in the yarded area.

As a result of the harsh winter, there will be more winter kill among local wildlife this year. Although this is all part of nature, one can’t help but feel a little sad about starving and frozen critters. The Durango Herald reported back in January that Durango locals have spotted many carcasses near town and even seen mountain lions feeding.

But it doesn’t have to be all doom and gloom. There are measures you can take to help wildlife make it through the winter.

Respect wildlife closure areas. Both the Bureau of Land Management and Colorado Parks and Wildlife manage seasonal closures of public lands. These closures prohibit public access in order to create a less stressful environment for wintering animals, or in some cases, nesting raptors. Starving animals conserve calories by moving as little as possible. Human encroachment from foot travel, biking, motor vehicle use and dogs – even on a leash – can startle wildlife and cause animals to run, therefore using valuable energy stores.

For more information about winter closure areas in Southwest Colorado, including maps, contact the BLM Tres Rios Field Office in Dolores at 882-7296 or Durango at 247-4874, and the CPW Durango office at 247-0855.

Minimize Impact Elsewhere. Animals that live near paved roads, populated areas and ski areas are habituated to noisy humans and are not as stressed by startling sounds. However, winter recreationists – skiers, snowshoers, fat bikers, snowmobilers and even ice climbers – who venture miles away from civilization pose a threat to the survival of wintering animals.

There are a number of studies out there that weigh the effects of noise from different types of human travel in winter. One study showed that deer are more startled by people on foot than snowmobiles. However, snowmobiles do have a greater impact in one way – the weight of snowmobiles causes the snow to collapse, destroying the subnivean underlayers needed by small mammals to survive winter – subnivian meaning “under the snow.” These subnivian creatures create a network of tunnels in the snow and create food caches. It is often much warmer under the snow than out in the open.

Owls are also suffering during this harsh winter. A study on the northern spotted owl showed that a visual disturbance from as far away as 100 meters can disturb the owls.

If you read the Feb. 14 Herald article about the tough winter for wildlife near Glenwood Springs, you are familiar with the fact that there has been an unusual number of dead owls this winter.

This was attributed in part to a lack of small animals above the snow, but human encroachment can also play a part.

So when going into the winter backcountry, think about the creatures that live out there and tolerate the weather all winter long. We humans can choose a warm bed at night, whether we tolerate by heating our house or migrate to southern Arizona and camp out where it is warm.

Life Beneath the Snow and Ice 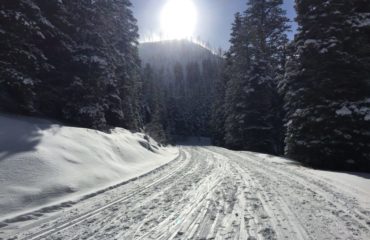