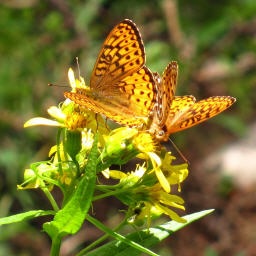 The summer rains have arrived. Yippee! These rains are helpful in so many ways. Perhaps mostly noticeably they provide enough water for the mountain wildflowers to bloom. These flowers coat the hillsides is a glorious canvas of color. The flowers also produce delicious nectar that is enjoyed by many of nature’s creatures. Look carefully and you will see hummingbirds, ants, bees, flies and others feeding on the nectar. When the sun is shining, butterflies are often seen drinking from these fantastic flowers.

What is a Butterfly?

Butterflies are a member of the insect family, and together with moths makeup the order known as ‘Lepidoptera’. The dividing line between butterflies and moths is fairly fuzzy and some creatures could seem to fall into either category. However, the main difference between them is butterflies are generally active in the day and moths are active at night. Also, in a resting position, moths lay their wings down over their bodies, while butterflies stand their wings up so that their undersides may be seen.

Fairly large colorful wings grace the butterfly and give the ability to fly. The large number of yellow winged varieties is probably responsible for the name. The wings seem uniquely designed to help avoid predators, but at the same time to attract mates. Eye patterns in some wings will ward off discerning birds and colorful displays sometimes serve as a warning of bitter flavors to keep away the epicureans. Meanwhile these patterns are recognized by other butterflies of the same species as a call to mate.

Butterflies have a large proboscis, which is actually a mouthpart, and is used to suck nectar and fluids from flowers. While feeding themselves butterflies also serve the function of helping to pollinate flowers.Adult females lay the eggs on a leaf that will become a food source for the new caterpillars. The caterpillars grow bigger and bigger as they eat the leaves. Eventually something is triggered in the caterpillar and it finds aquiet spot to go into its chrysalis phase. The caterpillar does not “build” a chrysalis around itself. Instead, the caterpillar sheds its skin and the chrysalis is underneath.

Their antennae are generally “clubbed” and covered with tiny hairs that also may be found on much of the rest of the body. These hairs tell the butterfly about wind currents, water, vibrations and nearby objects. Butterflies have two compound eyes that see a broad spectrum of light including ultraviolet.

The time lines for (adult) butterflies vary widely, from a few weeks to a couple of years. Some, such as the monarch butterfly actually migrate for various stages and activities. Butterflies also vary widely in size, color and activity.

A butterfly has four stages in its life cycle: egg, larva (caterpillar), pupa (chrysalis) and adult (butterfly). It is a repetitive cycle, but the butterfly does not turn back into an egg!
Like most animals, the male and female adults work together to produce new fertilized eggs.

Adult females lay the eggs on a leaf that will become a food source for the new caterpillars. The caterpillars grow bigger and bigger as they eat the leaves. Eventually something is triggered in the caterpillar and it finds a quiet spot to go into its chrysalis phase. The caterpillar does not “build” a chrysalis around itself. Instead, the caterpillar sheds its skin and the chrysalis is underneath. When the butterfly emerges from its chrysalis, its new wings are fragile. It waits patiently for the wings to dry out and strengthen. Then it flutters away! Many other insects go through similar life cycles.

There are over 60 species of butterflies in Colorado. Here are some of the more common ones seen in the summer above 8,500 feet and the flowers on which they feed. They vary greatly in size, color and plant food. Read on to learn more about these winged wonders! 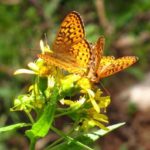 Easier to spot than it is to spell, this butterfly is everywhere from June to August. Their colors fade as they reach the end of their lives. 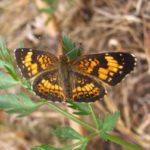 Appropriately named, this butterfly is identified by thespots within its checkered pattern. There are at least 8 species of checkerspots in Colorado and pattern varies within each species. 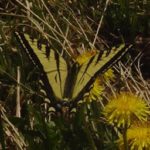 One of the largest butterflies you will see, these are also some of the most common butterflies during June and July.

Favorite flowers: many flowers, including red clover,dandelion and thistles 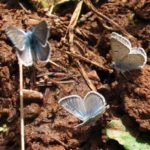 These little beauties are so small, you might miss them…until you startle them and they flutter away. Look for them in muddy, wet areas. They love moisture.Arrowhead blues are one of many species of blues in Colorado. It is differentiated by a tiny orange arrowhead on the outside bottom of each hind wing.

Favorite flowers: anything in the pea family, especially lupines 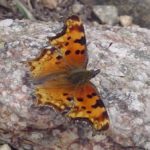 Easily mistaken for the larger Tortoiseshell, the Comma has a small comma in the center underside of its hind wing. This butterfly hibernates in winter. 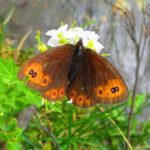 This butterfly is not as common in this area as the name would imply. Look carefully and you may be fortunate enough to spot one.

Want to learn more about butterflies and flowers?  MK Gunn is leading a Butterflies and Blooms hike up Cascade Creek on Saturday, July 30th, 9:30am – noon. Details can be found here. 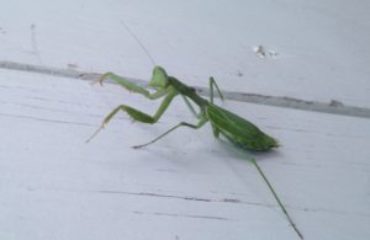 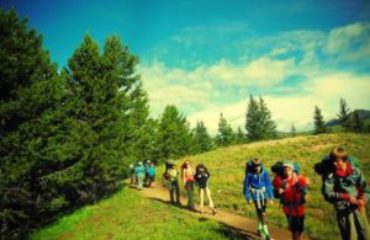 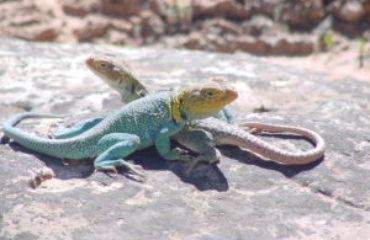